The system act as a combined “detection-deterrent-recording” system. Individual problem animals are tagged with a small low cost radio transmitter emitting a low energy, unique radio frequency (RF) ID signal. A base station is placed at or near areas from where the problem animal should be deterred, either agricultural fields or cattle bomas. This base station will detect (and record) any RF signal and ID emitted from approaching tagged animals. If such a signal is detected and gets within a threshold distance (threshold signal strength) and if it belongs to a species or individual considered a treat to this location the base station will initialize an alarm response. This alarm response could be but not limited to flashing light or sound. The alarm response can also be graduated so different responses are activated as signal gets progressively stronger.

Unit 1 Is a tag placed on the wildlife either as an integrated part of a traditional GPS tracking collar or as a standalone implant/tag. The tag can be as small as a few grams and designed as an ear tag or placed in a lightweight neck collar. Its deployed on specific problem animals and not the entire population hence targeting the few individuals who typically are responsible for the majority of conflict behaviour. This unit emits a unique unit specific coded RF signal on a frequency shared by all tagged animal (433 MHz or similar). The signal will be transmitted at intervals of approx 10-20 seconds. The signal will be emitted at low energy levels as detection is only required within a relatively short distance (3-500 meters) but can be adjusted for detection to 1+ km.

Unit 2 Acts a base station and is placed in or near cattle holding pens, agricultural fields or other sites that are under threats from wildlife. The unit contains 3 main components namely:

The base station also contains a small push button acting as a verification tool for documenting the physical presence of people on the site. By pushing this button shortly after an alarm has been triggered the person can prove that he has acted and investigated the occurrence should the incident result in wildlife damage and a subsequent insurance claim. 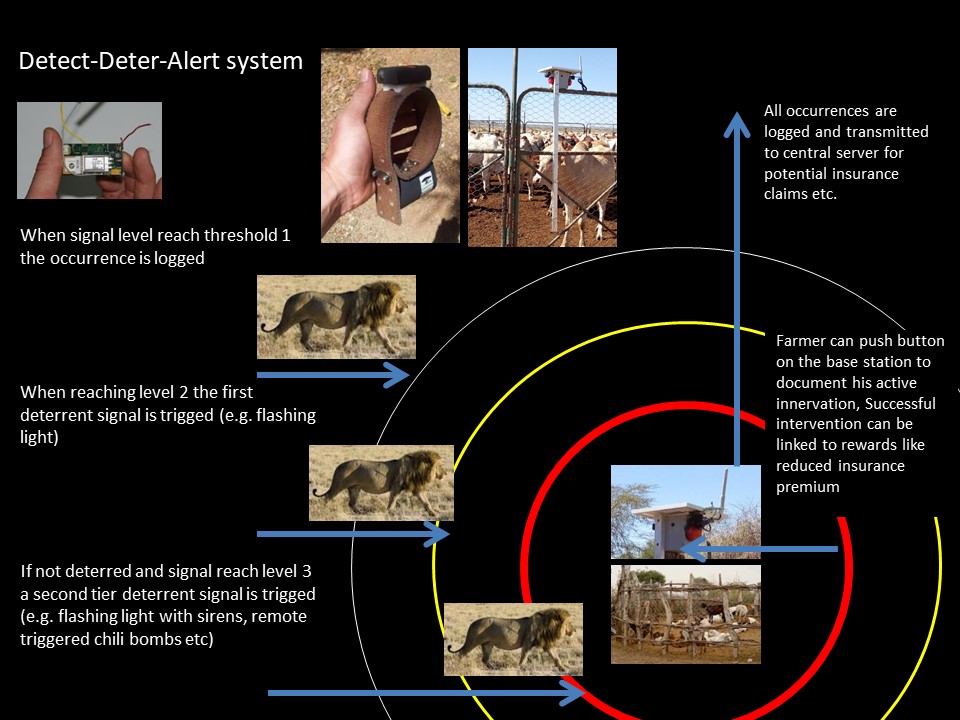 The advantage of this system is that problem animals will not get accustomed to the alarm signals as they are only emitted on their approach. Furthermore any incidences can be linked to detected signals so the identity of the offending animal is known or indeed proven not to belong to know problem animals so attempts can be made to tag this new offending animal. The base station will be fitted with a button which the farmer and herder need to press in case of an alarm. This will prove that some sort of action or human presence has happened as a response to the alarm and thus show that the owner has attempted to stop the occurrence before a loss is incurred. All information on detected signals, triggered alarms and activated push buttons will automatically be send via a GSM data link to a central server for monitoring. This is a two way communication so additional lists of tagged animals can be uploaded or alarms can be activated or deactivated depending on time of year and need for exclusion. Information on occurrences can be used for adding an insurance scheme to the system with compensation paid out if losses are incurred despite alarms and appropriate action from the owner.

The system has the advantage of: Flexible exclusion enabling the construction of a virtual dynamic matrix of “go” and “no go” areas easily linked to time of year allowing to open and close areas depending on e.g. crop status.

We use cookies to ensure that we give you the best experience on our website. If you continue to use this site we will assume that you are happy with it.Ok